The Cisco Nexus 1000V is made from 2 components :The VSM

Unlike with the VSM, the VEM’s resources are unmanaged and dynamic. Although the storage footprint of the VEM is fixed (approximately 6.4 MB of disk space), RAM use on the Microsoft Hyper-V host is variable, based on the configuration and scale of the Cisco Nexus 1000V deployment. In a typical configuration, each VEM can be
expected to require 10 to 50 MB of RAM, with an upper limit of 150 MB for a fully scaled solution with all features turned on and used to their design limits.
Each instance of the Cisco Nexus 1000V is typically composed of two VSMs (in a high-availability pair) and one or more VEMs. The maximum number of VEMs supported by a VSM is 64

First we are going to create the backbone of the switch by installing 2 VM’s to make the Switch HA.

From the VEM folder copy the Nexus1000V-VEM-5.2.1.SM1.5.2b.0.msi to the SCVMM server (C:\ProgramData\Switch Extension Drivers) This is the installer SCVMM is using to deploy the VEM Module extension into the Hyper-V Switch on the Hosts

Copy from the extracted folder >VSM>the ISO to your MSSCVMMLibrary ISO Share.

From extracted folder copy the Nexus1000V-VSEMProvider-5.2.1.SM1.5.2b.0.msi to your desktop from the VMM Server.

Run the MSI (be aware it restarts the SCVMM Server service) : 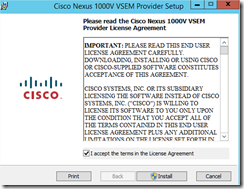 On the VMM Server open a administrative Powershell and navigate to
C:\Program Files\Cisco\Nexus1000V\Nexus1000V-VSMTemplate

Cisco made a script to create a VM Template for the VSM Servers we are going to deploy.

You might recognize the the template VM has 3 network adapters. From the manual a statement about the usage:

VSM Interfaces
The VSM is a virtual machine that requires three virtual network interface cards (vNICs). Each vNIC has a specific function, and all are fundamental to the operation of the Cisco Nexus 1000V. To define the VSM virtual machine properties, the vNICs require the synthetic network adapter.

The packet interface is a traditional interface on the Cisco Nexus 1000V VSM for Microsoft Hyper-V.

Now deploy 2 VM’s from the new template that is available in the Templates.

When the deployment is done mount the nexus iso and start the machine.

in the next post we are going to install the VSM. Stay tuned!